You are not connected. Please login or register

» Cockpit Sherman "Easy Eight"
by MrCoredump Today at 7:29 am

» How to get missions
by BestA SilenciosA Yesterday at 8:41 am

How to disguise the gun of the "Firefly"?

How to disguise the gun of the "Firefly"?

As it appeared there was a problem with gun recognizing! Coz enemy fire immediately concentrated on tank equipped with such gun. Just wonder how German disguise Panther`s barrel?

And here is article itself:
The 17-pr gun barrel is approx twice the length of that of the 75mm gun previously mounted. A tank so armed is therefore easily recognizable and when used in support of tanks armed with 75mm gun, is likely to be a target for concentrated enemy fire.
In early October, 1944, G(Cam) Eighth Army were asked for advice on the disguise of the 17-pr gun.

Two methods have been adopted as follows:

Method B.
A dummy 75mm gun is mounted on the wireless box at the rear of the turret. When the tank is not in action the turret is reversed. The dummy gun is then at the front of the tank and the 17-pr is concealed with foliage behind. Method A can be employed alone, but its use was also recommended in conjunction with Method B to disguise the 17-pr when in action and to reduce visibility of the portion which cannot be covered when the gun is not in action.
17-prs on Sherman tanks are therefore being treated as in Method A whether Method B is employed or not.
A demonstration of both methods was given at RICCIONE on 18 Oct. It was attended by representatives from armoured formations etc., who were asked to state which of the two methods was preferred. Method A met with general approval, whereas reactions to Method B were, as was expected, somewhat varied.
Objections to Method B included the following:-
(a) The danger of both guns being observed.
(b) The possible difficulty, in close country, of rotating the turret in order to bring the 17-pr into action.
(c) The probable adverse effect on confidence of tank crews of moving into action with the turret and 17-pr in the reverse position. Method B, however, was thought good enough to make it worth while manufacturing dummy 75mm guns for use when thought practicable. It was considered that, whatever its limitations might be, it was at least a good method of concealing the identity of the 17-pr Sherman in any concentration area under observation.
50 dummy 75mm guns have been manufactured up to the present date and 24 have so far been fitted.
Copy of a drawing issued to formations showing methods of painting the barrel and fitting of dummy 75mm gun is shown at Appendix "F".

"Method of painting in conjunction with false muzzle brake"

"Method of fixing dummy 75mm gun on rear of turret" 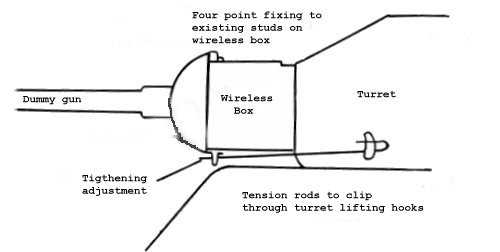 "Position of 17 pr when not in action"

Re: How to disguise the gun of the "Firefly"?

"Method of painting in conjunction with false muzzle brake"

A rare view of a Sherman IC (Hybrid) Firefly with cast-hull front This view also shows,  nicely the fake muzzle brake located half-way down the barrel and the disruptive camouflage scheme used to disguise the tank's tell-tale longer barrel.

Well, I hardly believe that this "method" could cheat German crew that barrel is rather short than long

A very odd arrangement indeed: an M4A4 Sherman V that is pretending to be a Firefly, with a long dummy gun paralleling the real one and a box on the rear of the turret. Unfortunately, we cannot see whether a loader's hatch has been added or the hull machine gun blanked off. Why on Earth should anyone do this?
SHERMAN FIREFLY, DAVID FLETCHER

BTW
Is it possible to rotate commander cupola on the "Firefly" or it was unmovable?

The commander's hatch on this particular vehicle is the same rotating
two-door type you see on earlier vehicles, with a periscope mount in
one door. But many of the later vehicles with wet ammo storage had a
new commander's vision cupola that included vision blocks around its
perimeter, which considerably improved the commander's view.